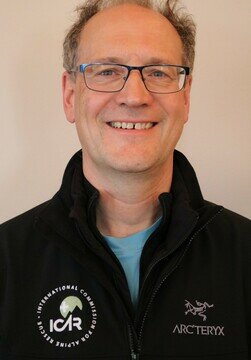 Dr John Ellerton was born in 1959 and has been involved in mountain rescue since 1986. He studied physiology at Cambridge University, England and then Medicine at Oxford University but even at that early stage he had his eyes on working and living in the mountains. After training posts, he became a partner in a General Practice in the Lake District, England. Looking after 16'000 patients 40 km from a hospital, he soon learnt a lot about emergency pre-hospital medicine.

His passion for walking, running, climbing and photography have survived many pressures and continues; the days of ice climbing UIAA grade V around the world are probably past and the annual numbers of 4'000m peaks in the European Alps have decayed but … you never know!

Dr Ellerton was the Medical Officer for Mountain Rescue England and Wales from 2002 until 2012. During this time, he was able to get mountain rescuers a unique amendment to the Medicines Act allowing rescuers to administer a wide range of emergency drugs to their casualties. He represented England and Wales internationally on medical matters at the International Commission for Alpine Rescue (ICAR) and became Vice-President of the Medical Commission (ICAR Medcom) in 2011. His chief role has been in coordinating the administrative group of the Diploma in Mountain Medicine abbreviated to DiMM/DiEMM (2011-18). This qualification, organised by the Medcoms of UIAA and ICAR and the International Society of Mountain Medicine, has grown from 8 courses run in Europe to an excess of 30 regular courses encompassing Asia, Europe, Scandinavia and North America, and irregular courses in South America.

Dr Ellerton was elected to the ICAR Executive Board as an Assessor in 2012. His role was to represent members' interests against the 'wayward' Commission Presidents. Now he has changed roles - he is now one of Presidents!

'Becoming President of ICAR Medcom in Ocober 2017 is a great honour. The Commission is a vibrant group of about 70 Health Care Professionals. Their collective experience is immense. Some members work in the most organised and regulated rescue systems and others are volunteers in teams with few resources beyond a stretcher. We are bound together by a passion for mountains and remote places, and a wish to help people that get into difficulty. ICAR encompasses 6 continents, if you include the North Pole! Our aim is to provide and encourage the free exchange of the best mountain rescue knowledge. My vision for the future is: To build on the work of Hermann and Fidel; strengthen mountain emergency research by making ICAR Medcom an essential hub and collaborator; develop knowledge/training for all Health Care Professionals (via DiMM/DiEMM) and for mountain rescuers; restructure Spring meetings to reach out to continents that remain on the periphery of ICAR and learn from others by defining a special topic such as drowning, disaster, occupational, etc.; define streams of work/teaching at the Fall meeting; develop 'Skype' type small group meetings; and routinely use the annual commission budget to the achieve these goals.'